This is a specification for the Iceberg table format that is designed to manage a large, slow-changing collection of files in a distributed file system or key-value store as a table. 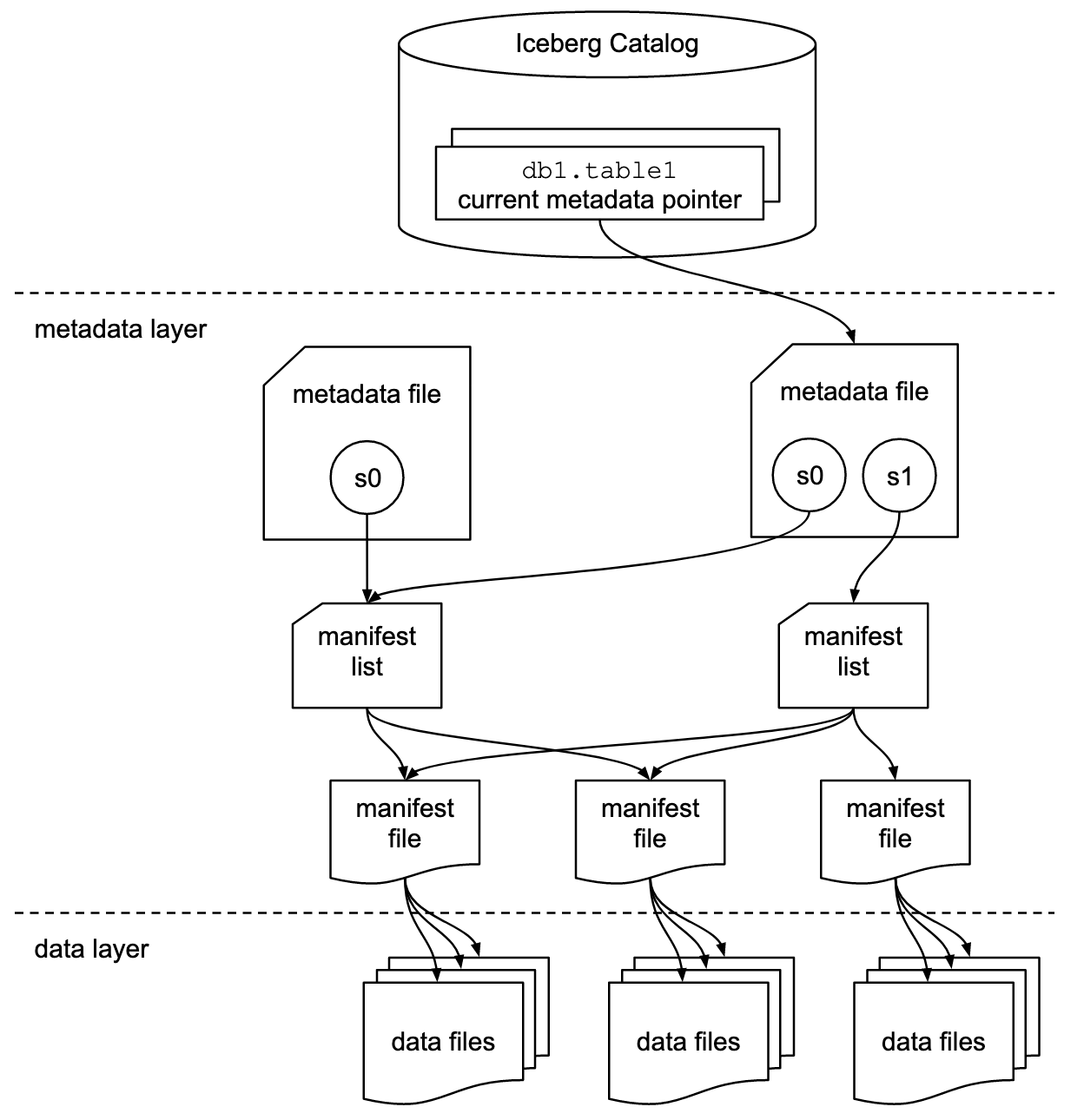 This table format tracks individual data files in a table instead of directories. This allows writers to create data files in-place and only adds files to the table in an explicit commit.

Table state is maintained in metadata files. All changes to table state create a new metadata file and replace the old metadata with an atomic swap. The table metadata file tracks the table schema, partitioning config, custom properties, and snapshots of the table contents. A snapshot represents the state of a table at some time and is used to access the complete set of data files in the table.

Data files in snapshots are tracked by one or more manifest files that contain a row for each data file in the table, the file’s partition data, and its metrics. The data in a snapshot is the union of all files in its manifests. Manifest files are reused across snapshots to avoid rewriting metadata that is slow-changing. Manifests can track data files with any subset of a table and are not associated with partitions.

An atomic swap of one table metadata file for another provides serializable isolation. Readers use the snapshot that was current when they load the table metadata and are not affected by changes until they refresh and pick up a new metadata location.

Writers create table metadata files optimistically, assuming that the current version will not be changed before the writer’s commit. Once a writer has created an update, it commits by swapping the table’s metadata file pointer from the base version to the new version.

If the snapshot on which an update is based is no longer current, the writer must retry the update based on the new current version. Some operations support retry by re-applying metadata changes and committing, under well-defined conditions. For example, a change that rewrites files can be applied to a new table snapshot if all of the rewritten files are still in the table.

Iceberg only requires that file systems support the following operations:

These requirements are compatible with object stores, like S3.

Tables do not require random-access writes. Once written, data and metadata files are immutable until they are deleted.

Tables do not require rename, except for tables that use atomic rename to implement the commit operation for new metadata files.

A table’s schema is a list of named columns. All data types are either primitives or nested types, which are maps, lists, or structs. A table schema is also a struct type.

For the representations of these types in Avro, ORC, and Parquet file formats, see Appendix A.

A struct is a tuple of typed values. Each field in the tuple is named and has an integer id that is unique in the table schema. Each field can be either optional or required, meaning that values can (or cannot) be null. Fields may be any type. Fields may have an optional comment or doc string.

A list is a collection of values with some element type. The element field has an integer id that is unique in the table schema. Elements can be either optional or required. Element types may be any type.

A map is a collection of key-value pairs with a key type and a value type. Both the key field and value field each have an integer id that is unique in the table schema. Map keys are required and map values can be either optional or required. Both map keys and map values may be any type, including nested types.

For details on how to serialize a schema to JSON, see Appendix C.

Schema evolution is limited to type promotion and adding, deleting, and renaming fields in structs (both nested structs and the top-level schema’s struct).

Any struct, including a top-level schema, can evolve through deleting fields, adding new fields, renaming existing fields, or promoting a primitive using the valid type promotions. Adding a new field assigns a new ID for that field and for any nested fields. Renaming an existing field must change the name, but not the field ID. Deleting a field removes it from the current schema. Field deletion cannot be rolled back unless the field was nullable or if the current snapshot has not changed.

Tables are configured with a partition spec that defines how to produce a tuple of partition values from a record. A partition spec has a list of fields that consist of:

The source column, selected by id, must be a primitive type and cannot be contained in a map or list, but may be nested in a struct. For details on how to serialize a partition spec to JSON, see Appendix C.

All transforms must return null for a null input value.

Bucket partition transforms use a 32-bit hash of the source value. The 32-bit hash implementation is the 32-bit Murmur3 hash, x86 variant, seeded with 0.

Transforms are parameterized by a number of buckets [1], N. The hash mod N must produce a positive value by first discarding the sign bit of the hash value. In pseudo-code, the function is:

For hash function details by type, see Appendix B.

A manifest is an immutable Avro file that lists a set of data files, along with each file’s partition data tuple, metrics, and tracking information. One or more manifest files are used to store a snapshot, which tracks all of the files in a table at some point in time.

A manifest is a valid Iceberg data file. Files must use Iceberg schemas and column projection.

A manifest stores files for a single partition spec. When a table’s partition spec changes, old files remain in the older manifest and newer files are written to a new manifest. This is required because a manifest file’s schema is based on its partition spec (see below). This restriction also simplifies selecting files from a manifest because the same boolean expression can be used to select or filter all rows.

The schema of a manifest file is a struct called manifest_entry with the following fields:

data_file is a struct with the following fields:

When a data file is added to the dataset, it’s manifest entry should store the snapshot ID in which the file was added and set status to 1 (added).

A snapshot consists of the following fields:

Snapshots can be split across more than one manifest. This enables:

Valid snapshots are stored as a list in table metadata. For serialization, see Appendix C.

Scans are planned by reading the manifest files for the current snapshot listed in the table metadata. Deleted entries in a manifest are not included in the scan.

For example, an events table with a timestamp column named ts that is partitioned by ts_day=day(ts) is queried by users with ranges over the timestamp column: ts > X. The inclusive projection is ts_day >= day(X), which is used to select files that may have matching rows. Note that, in most cases, timestamps just before X will be included in the scan because the file contains rows that match the predicate and rows that do not match the predicate.

Snapshots are embedded in table metadata, but the list of manifests for a snapshot can be stored in a separate manifest list file.

A manifest list encodes extra fields that can be used to avoid scanning all of the manifests in a snapshot when planning a table scan.

field_summary is a struct with the following fields

Table metadata is stored as JSON. Each table metadata change creates a new table metadata file that is committed by an atomic operation. This operation is used to ensure that a new version of table metadata replaces the version on which it was based. This produces a linear history of table versions and ensures that concurrent writes are not lost.

The atomic operation used to commit metadata depends on how tables are tracked and is not standardized by this spec. See the sections below for examples.

When two commits happen at the same time and are based on the same version, only one commit will succeed. In most cases, the failed commit can be applied to the new current version of table metadata and retried. Updates verify the conditions under which they can be applied to a new version and retry if those conditions are met.

An atomic swap can be implemented using atomic rename in file systems that support it, like HDFS or most local file systems [1].

Each version of table metadata is stored in a metadata folder under the table’s base location using a file naming scheme that includes a version number, V: v<V>.metadata.json. To commit a new metadata version, V+1, the writer performs the following steps:

The atomic swap needed to commit new versions of table metadata can be implemented by storing a pointer in a metastore or database that is updated with a check-and-put operation [1]. The check-and-put validates that the version of the table that a write is based on is still current and then makes the new metadata from the write the current version.

Each version of table metadata is stored in a metadata folder under the table’s base location using a naming scheme that includes a version and UUID: <V>-<uuid>.metadata.json. To commit a new metadata version, V+1, the writer performs the following steps:

Values should be stored in Avro using the Avro types and logical type annotations in the table below.

Optional fields, array elements, and map values must be wrapped in an Avro union with null. This is the only union type allowed in Iceberg data files.

Iceberg struct, list, and map types identify nested types by ID. When writing data to Avro files, these IDs must be stored in the Avro schema to support ID-based column pruning.

IDs are stored as JSON integers in the following locations:

Note that the string map case is for maps where the key type is a string. Using Avro’s map type in this case is optional. Maps with string keys may be stored as arrays.

Values should be stored in Parquet using the types and logical type annotations in the table below. Column IDs are required.

Lists must use the 3-level representation.

One of the interesting challenges with this is how to map Iceberg’s schema evolution (id based) on to ORC’s (name based). In theory, we could use Iceberg’s column ids as the column and field names, but that would suck from a user’s point of view.

The column ids would be stored in ORC’s user metadata as iceberg.column.id with a comma separated list of the ids.

The types below are not currently valid for bucketing, and so are not hashed. However, if that changes and a hash value is needed, the following table shall apply:

Partition specs are serialized as a JSON object with the following fields:

Each partition field in the fields list is stored as an object. See the table for more detail:

In some cases partition specs are stored using only the field list instead of the object format that includes the spec ID, like the deprecated partition-spec field in table metadata. The object format should be used unless otherwise noted in this spec.

Table metadata is serialized as a JSON object according to the following table. Snapshots are not serialized separately. Instead, they are stored in the table metadata JSON.

This serialization scheme is for storing single values as individual binary values in the lower and upper bounds maps of manifest files.